I wanted a small pitch connector series to use on a new project. In the past I had used hacky solutions along the lines of 2.54mm and 1.27mm breakaway headers and wanted something more robust with positive retention. In theory I only need board to wire, but more options would be nice. Max current of 1A, max voltage of 16V and crimpable for prototype work.

The JST SH series hit all my requirements and were available in surface mount package.

I was initially concerned about the terminals being too small to work with for prototype work. I dug around the Internet and found some people saying they were too small and a few saying they were workable with the $40 Engineer PA-09 from Amazon. For the price I figured why not. So I took the plunge, ordered the crimp tool and made my boards to use the JST SH surface mount connectors.

And then reality caught up with me

First, this connector works fine for many connectors, but not the 1 mm pitch JST-SH connectors. It would crush the terminal conductor crimp fingers. I’d then have to rotate the terminal 90 degrees to crush back to a size that would fit int he JST SH housing. And when it didn’t fit, it would crack the plastic dividers separating the terminals in the housings.

I wasted 20+ terminals trying to crimp 7 wires, which then failed later. Double fail.

Search for an Alternative

I poke around the Internet and stumbled on the Molex PicoBlade 1.25 mm series before getting confirmation from a few friends that used them without issue. A friend had the very nice and $300 Molex crimper #63819-0300. And the crimps were perfect. Not exactly surprising given the fact that the crimper is 10x the price. That said, the only crimp tool for the JST SH connectors I could find was the YRS-850 for $1100 on Digi-Key. Forget that.

After adopting the PicoBlade I fell in love with them for a number of other reasons:

I took some quick pictures of my JST SH <-> Molex PicoBlade adapter. 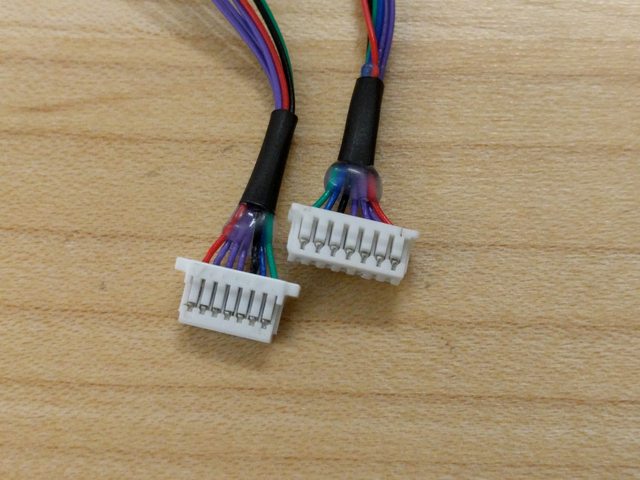