AVJONE NC318 Smart WiFi Outlet is a unique connected WiFi smart outlet as it has two USB ports. The USB ports are handy for powering nearby widgets. By default the outlet and the USB ports are switched on and off together. 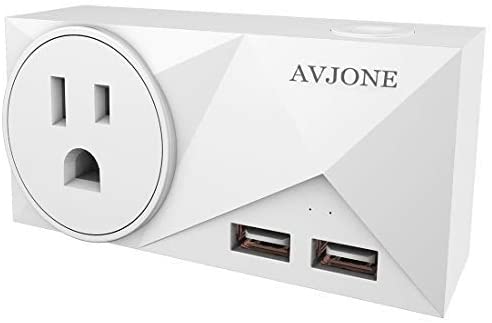 The outlet is built around the PSC-B67-GL module which includes a Espressif ESP8266 and Chipsea CSE7759B for energy monitoring. This Chipsea module tends to be more accurate out of the box as it uses a UART to report the data as opposed to a frequency signal other devices use.

The USB ports are rated for 2.1A max combined at 5V. I’m slightly skeptical that it can sustain this but didn’t test it. This design is nice as it leverages a single 5V power supply for both the ESP8266 and an external device.

The device has two LEDs (one is controlled by software) and a single button.

Opening the smart outlet is as simple as removing 4 screws from the back. No guessing and popping or breaking plastic clips.

The design and build quality of the outlet leaves quite a bit to be desired. I hope the manufacturer takes some steps to improve it as it’s a in another world compared to things like the UL certified Sonoff S31 on the power side and the PSC-B67-GL module doesn’t have an RF shield as most ESP8266 modules do. It does have a chip antenna which is harder to screw up based on how hurried and unpolished this board looks. 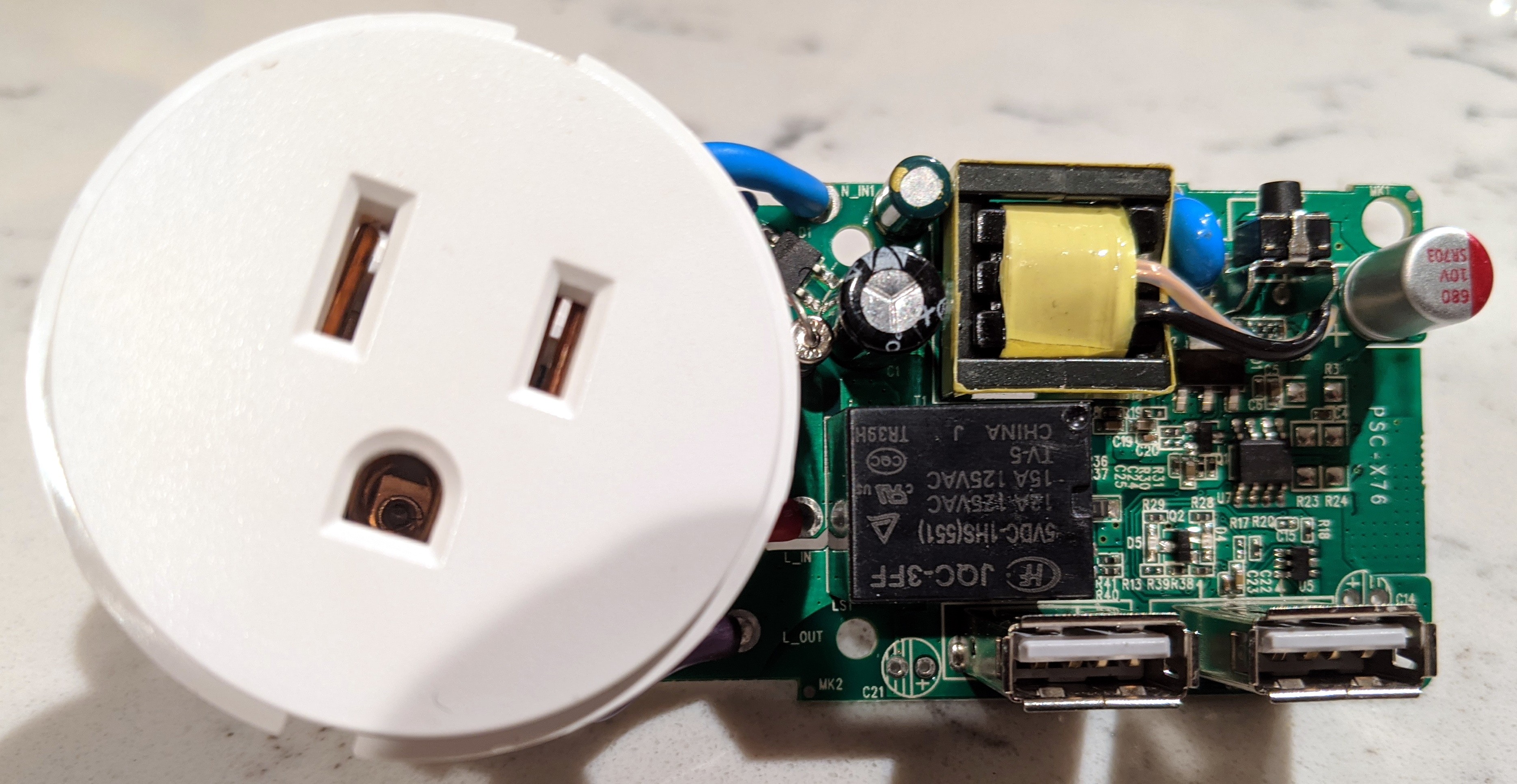 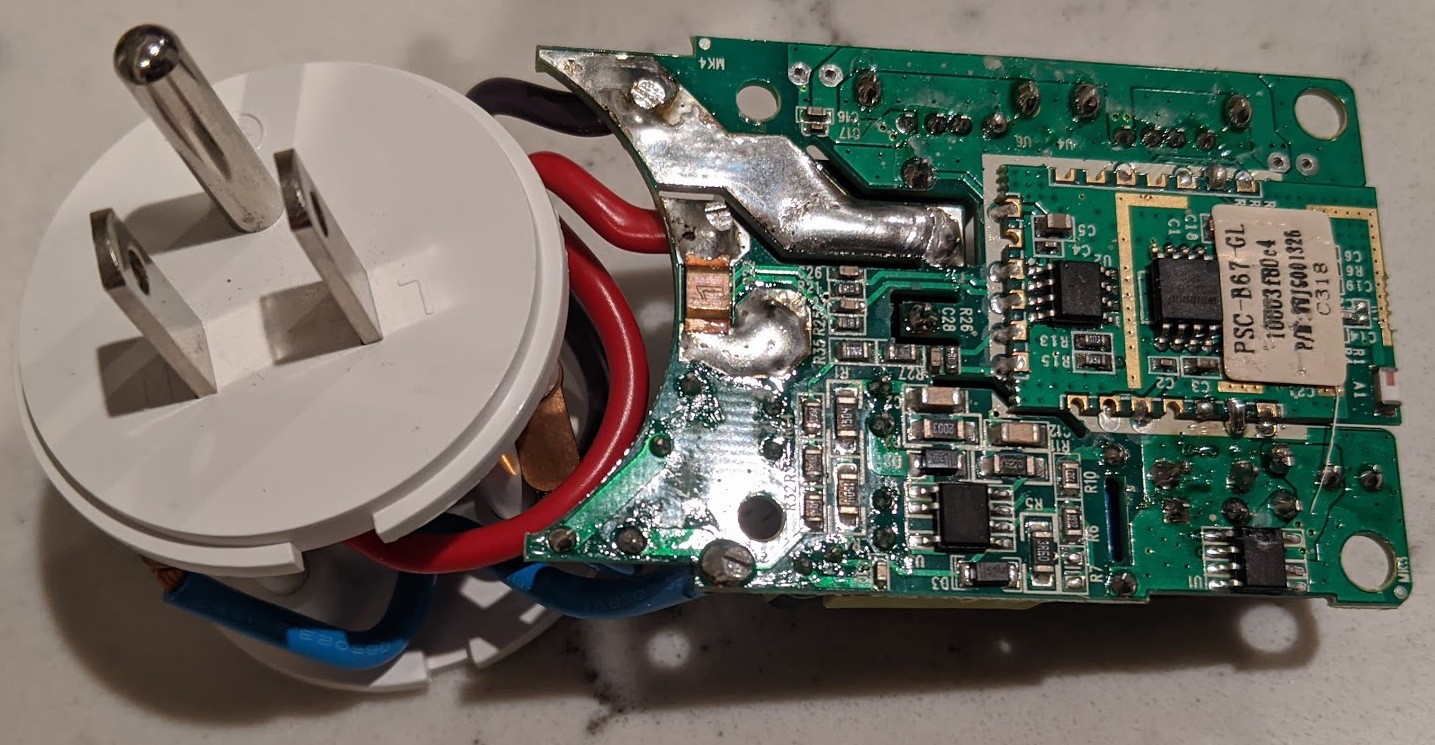 Flashing with Tasmota is pretty straight forward once the module pins are identified, and jumper wires soldered on. See the image below for labels of the essential pins. I tested on Tasmota v9.1.0. 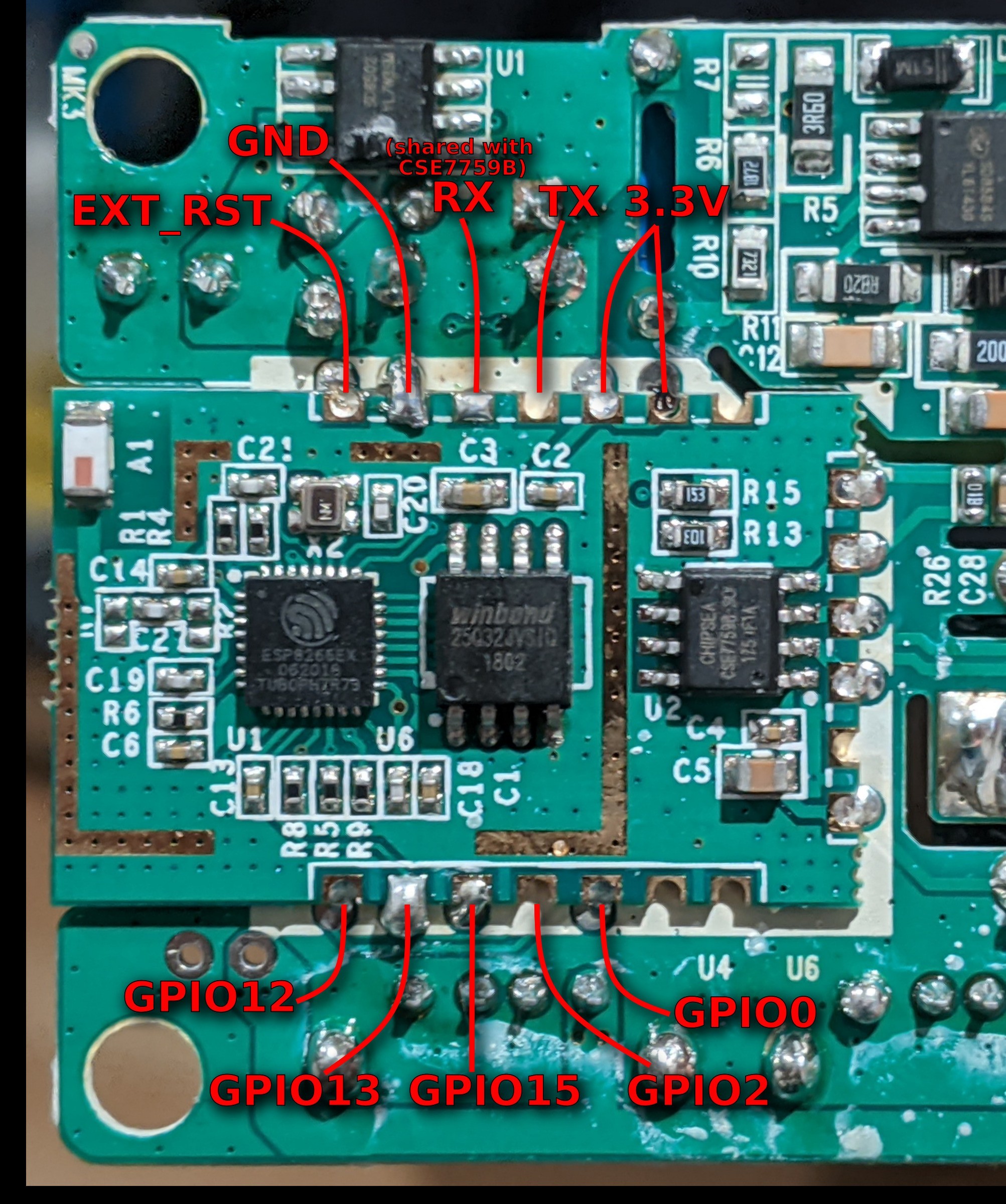 The RX pin (from the perspective of the ESP8266) is shared with the Chipsea CSE7759B using a series resistor to allow UART programming of the ESP8266 to drive the line for programming. This confused me for a while as I thought I had TX and RX backwards. The bit rate to the CSE7759B is very low and the signal is attenuated as a result of this resistor should you get stuck and hook up an oscilloscope.

The template is based off the Sonoff S31 as it uses the same ESP8266 and CSE7759B. I’m sure other variations work as well.

This should be enough to make the outlet work.

Note:Relay 2 and Ledi_i 2 are to enable USB control after re-work. Without the re-work they will not serve any purpose.

The PCB can be re-worked by adding a simple jumper wire and re-using the existing resistor to allow GPIO2 to independently control what appears to be a P-channel MOSFET that controls the flow of power to the USB Type-A connector ports. The 5V power supply is always on as it powers the ESP8266. 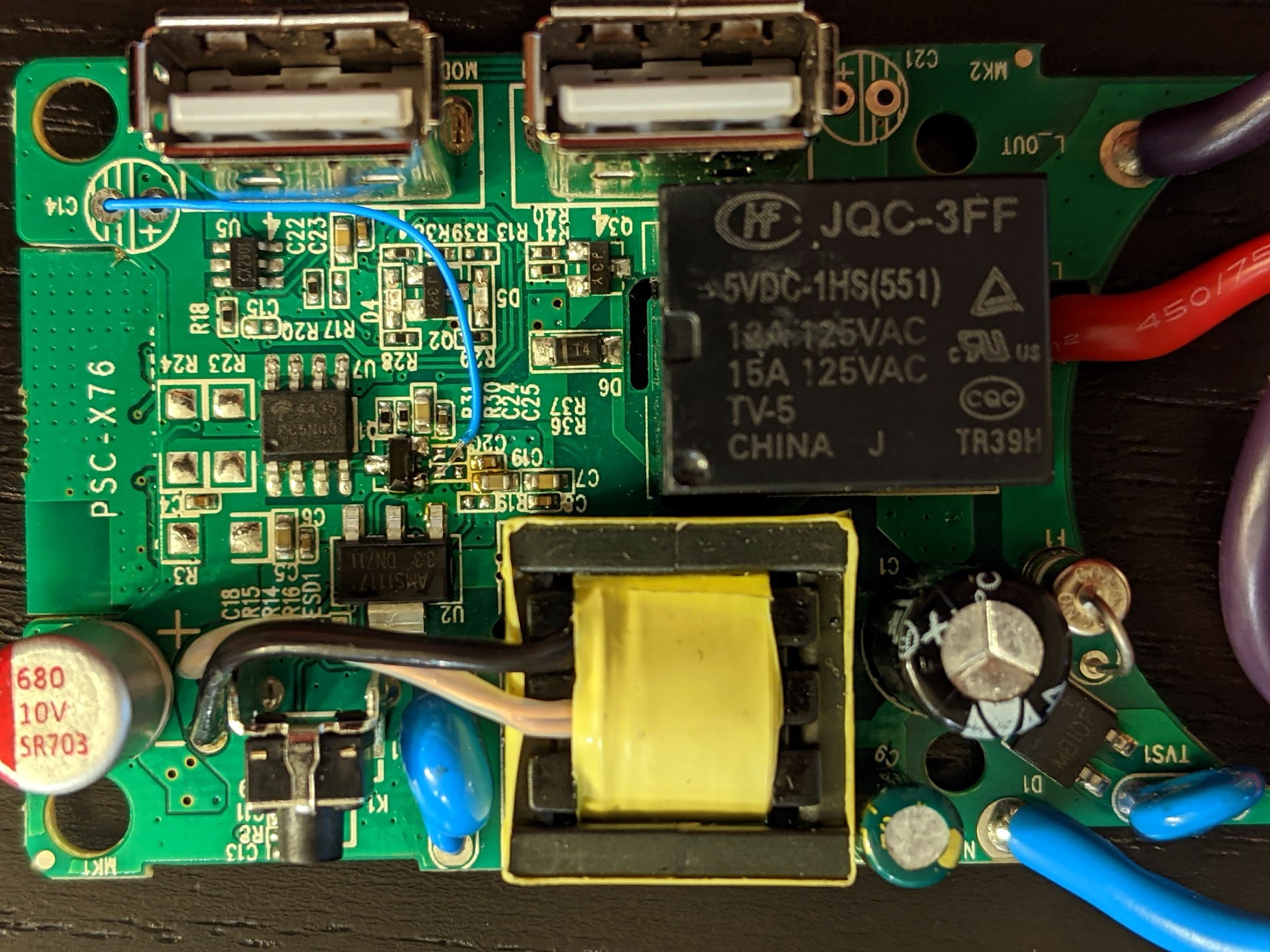 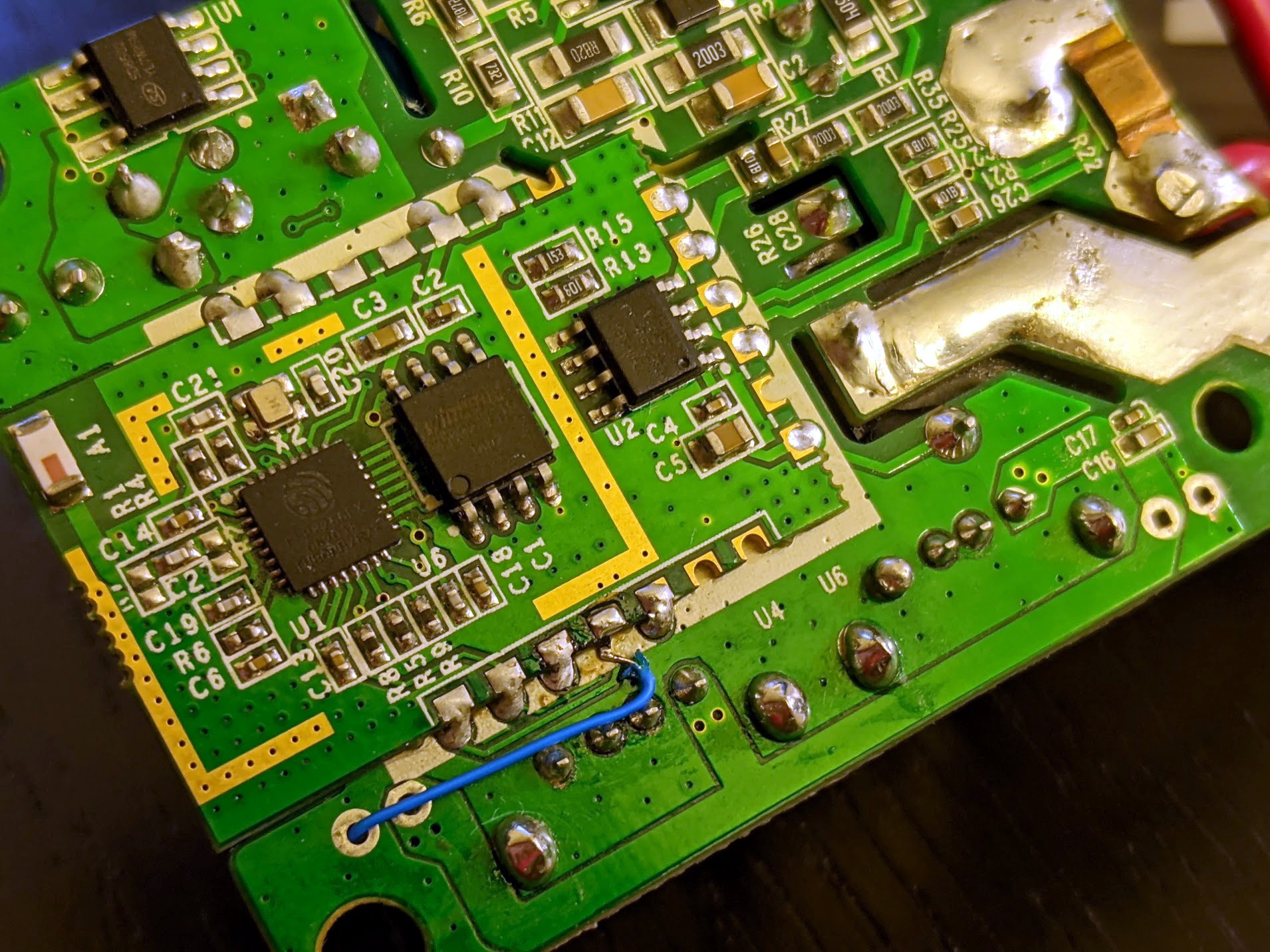 At this point the Tasmota tempalte shared above should toggle the MOSFET using the Relay 2 control in Tasmota.

As always, perform Tasmota calibration. I use a 40W incandescent light bulb and a Fluke 187.

After this is complete I use this device for control control with MQTT and Home Assistant and logging with InfluxDB and Grafana.