California Wildfires and My Home

The San Francisco Bay Area has been blanketed with wildfire smoke from record setting wildfires creating strange phenomena such as turning the sky an orange-red for a day. In response to an ever rising air quality index (AQI, where higher value is less healthy) I’ve been forced to stay indoors and abandon my normal bike rides, runs, and motorcycle adventures. 😞

With nothing better to do and curious about the air quality in my home I’ve been watching PurpleAir’s local sensor data in my neighborhood. PurpleAir is a company that sells consumer grade air quality sensors for about $250 and then publishes the data to their site giving localized information.

AirNow.gov has launched a site that combines regulatory grade sensors and PurpleAir sensors to give a better picture. The SF regulatory sensor is located in Potrero Hill and has data available via CSV for those interested, but the data is not as easy to ingest as PurpleAir’s API and lags behind up to an hour.

All that said, there’s plenty of data about outdoor air quality, but not a good way to measure and track the indoor quality at my home or better yet determine if my Winix P150 air purifier helps the situation.

There must be a way to collect this data, save it to InfluxDB, and plot it with Grafana with a little hardware.

The core of assembling some hardware to measure air quality is to measure the concentration of particulate matter in the air measuring smaller then roughly 2.5 μm in diameter. This is commonly referred to as “PM2.5” and the concentration is a measure of mass with the units of μg/m³. This is then converted to the Air Quality Index (“AQI”) everyone references.

To measure the PM2.5 concentration there are may techniques ranging from costly to cheap. Regulatory sensors use methods such as as beta attenuation monitoring, but hosting a radioactive source seems dangerous and cost prohibitive for my passing interest in monitoring AQI. More accessible sensors use a principle of dynamic light scattering to measure the size of PM1, PM2.5, and PM10 particles.

The PurpleAir sensors use two PlanTower PMS5003 sensors for what I assume is fault tolerance (apparently not good enough as the PurpleAir sensor at UCSF seems to be failing accordingly to the data and sporadic readings). There have been some tests (field evaluation and laboratory evaluation) showing that the sensor performs pretty well, especially for the cost. Turns out there are a few generations of the PlanTower products starting with the PMS3003, newer versions PMS7003, PMS1003 and with PMSA003 being the newest.

The PMSA003 sensors can be bought on AliExpress for less then $20 each and roughly $35 via Amazon third party sellers. This is a very approachable price compared to what I feared.

I selected a TTGO ESP32 T-Display module as it has an ESP32 micro controller (with integrated WiFi for those not familiar), a USB-C connector (it’s 2020 after all), and a small 1.14” LCD display. All this for between $8 on AliExpress and ~$13 through Amazon.

Finally, I selected a Bosch BME680 to measure some interesting environmental parameters including temperature, humidity, pressure, and volatile organic compounds. The VOC sensor is novel and returns a “gas resistance” measurement using a 320°C hot plate within the sensor, but I struggle to make much sense of the output. Seems that higher resistance is lower VOC concentration. There’s a driver from Bosch on Github, but I haven’t looked any closer at it. This sensor is kind of expensive when compared to the BME280 where the only difference appears to be the absence of the gas resistance sensor which has limited utility for my use.

The sensor emits data using a 9600 bps UART at regular intervals and seems to require no actual configuration to start emitting data.

For platforms to build on, I want to use an ESP8266/ESP32 so that I can leverage platforms like Tasmota (which I’ve used in the past for IoT things) and ESPHome (which I’ve been looking for an excuse to use).

Tasmota has a basic driver for the PMS3003, PMS5003, and PMS7003 sensor. I didn’t dig any deeper then this as Tasmota primarily targets ESP8266 platform and I wanted to use an ESP32 as it’s more capable for only a small price increase.

I learned that the ESPHome has support for the PMSX003 platform and my search halted there as ESPHome also has great ESP32 support.

Starting in ESPHome v1.15.0 support for the ST7789V LCD controller was added.

To start I wired up everything by hand. It was a mess. It was fragile and would break if you looked at it wrong. But, it worked! 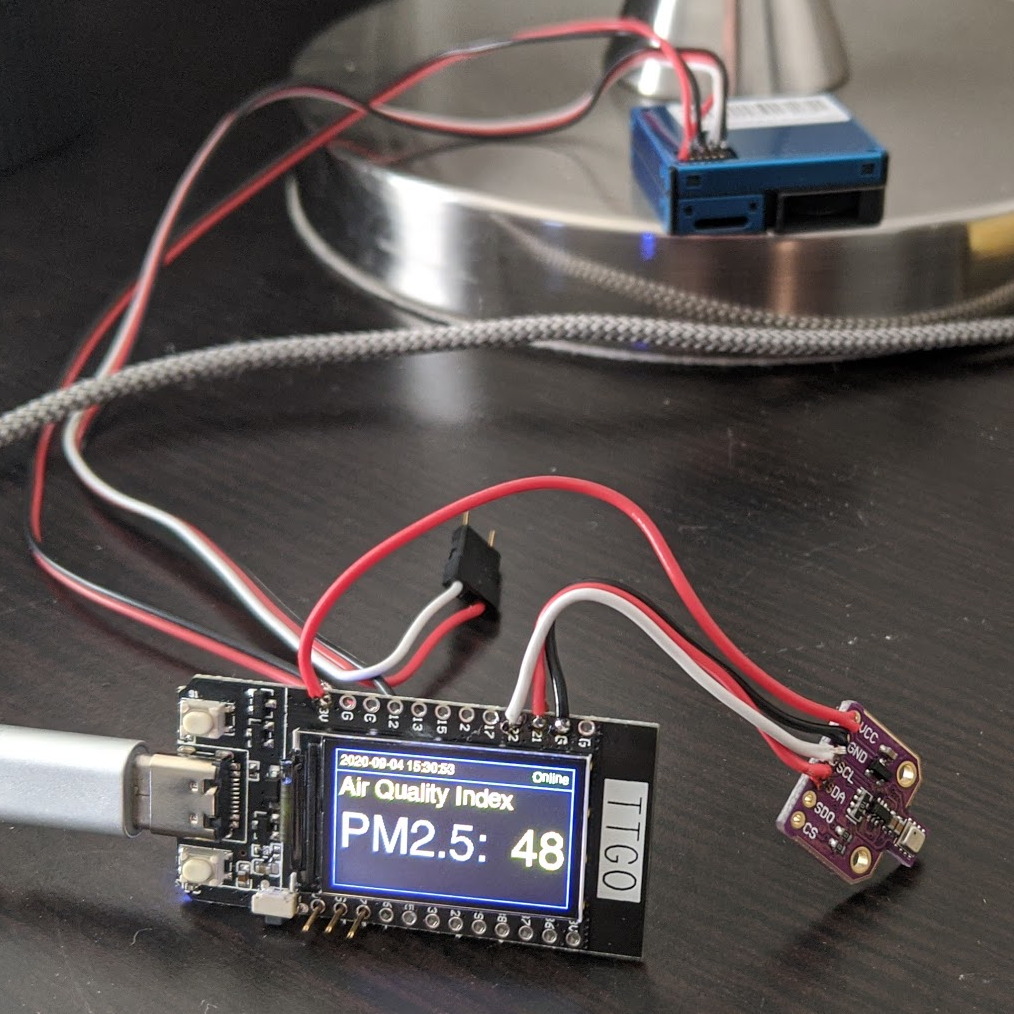 The ESPHome software was amazingly easy to use. I did nothing more then fire up a Docker container to compile the software and to then flash the device over USB for the first time. All from my web browser, I have yet to directly touch a compiler for this project. Amazing.

Subsequent updates to re-flash the ESP32 were handled over the air and I never had to plug the device back in to my computer.

All the device application specific parts of my project are implemented in YAML. Some of YAML ends up as C++ lambda functions to do the heavy lifting. The platform abstracts this away and it’s easy to forget it’s actually compiled to C++ at the end of the process.

YAML itself is awkward to use for things like inline lambda functions but ESPHome platform is feature rich enough to justify the clumsy nature of YAML syntax for these things.

To take the project to the next level I spent a few hours and put together a KiCad schematic and PCB design to replace the wires and create some structure. The PCB mounts the TTGO ESP32 T-Display module on top with the PMSA003 particulate matter sensor and BME680 are on the back side mostly hidden from view as it sits on my dresser. 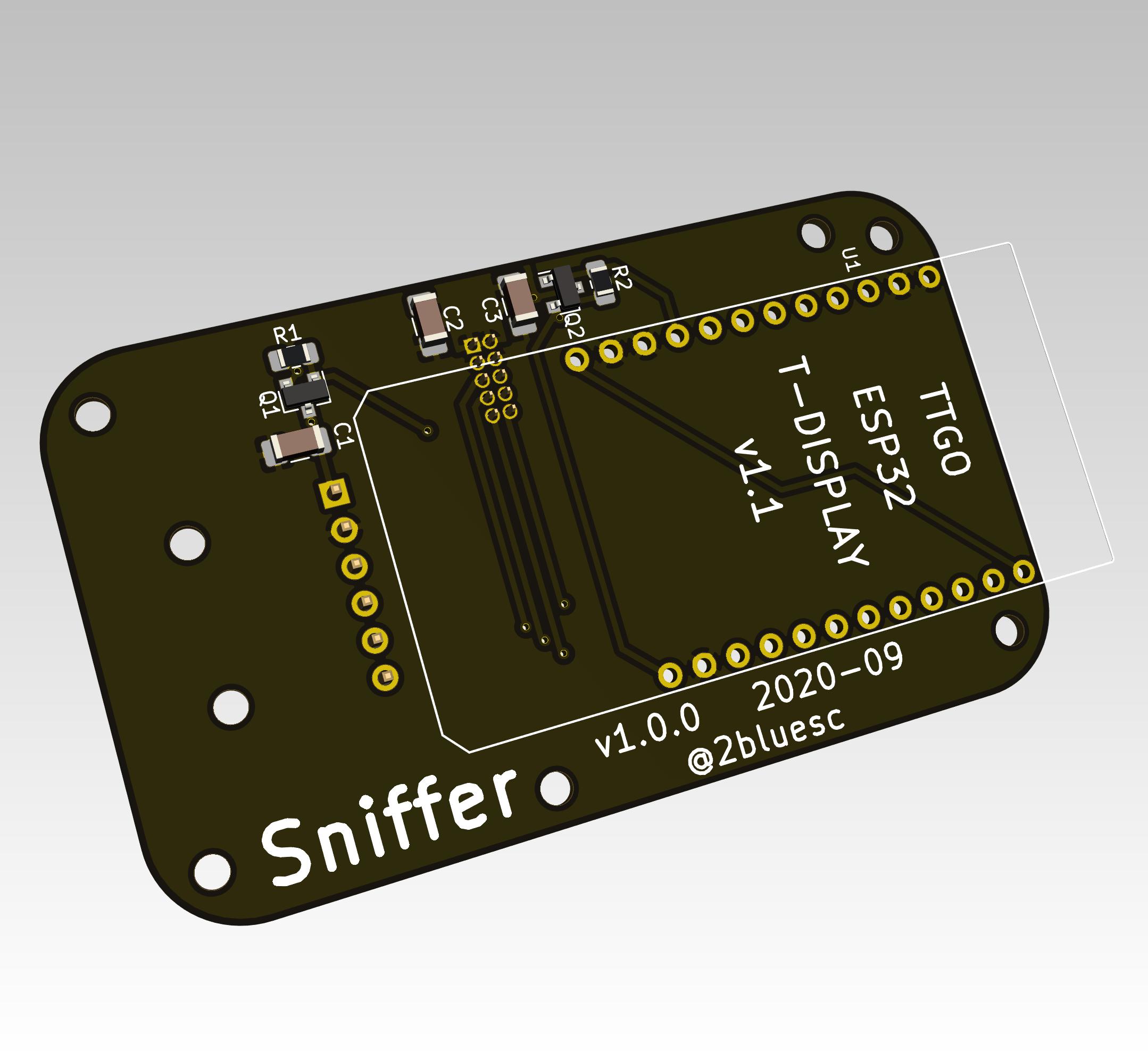 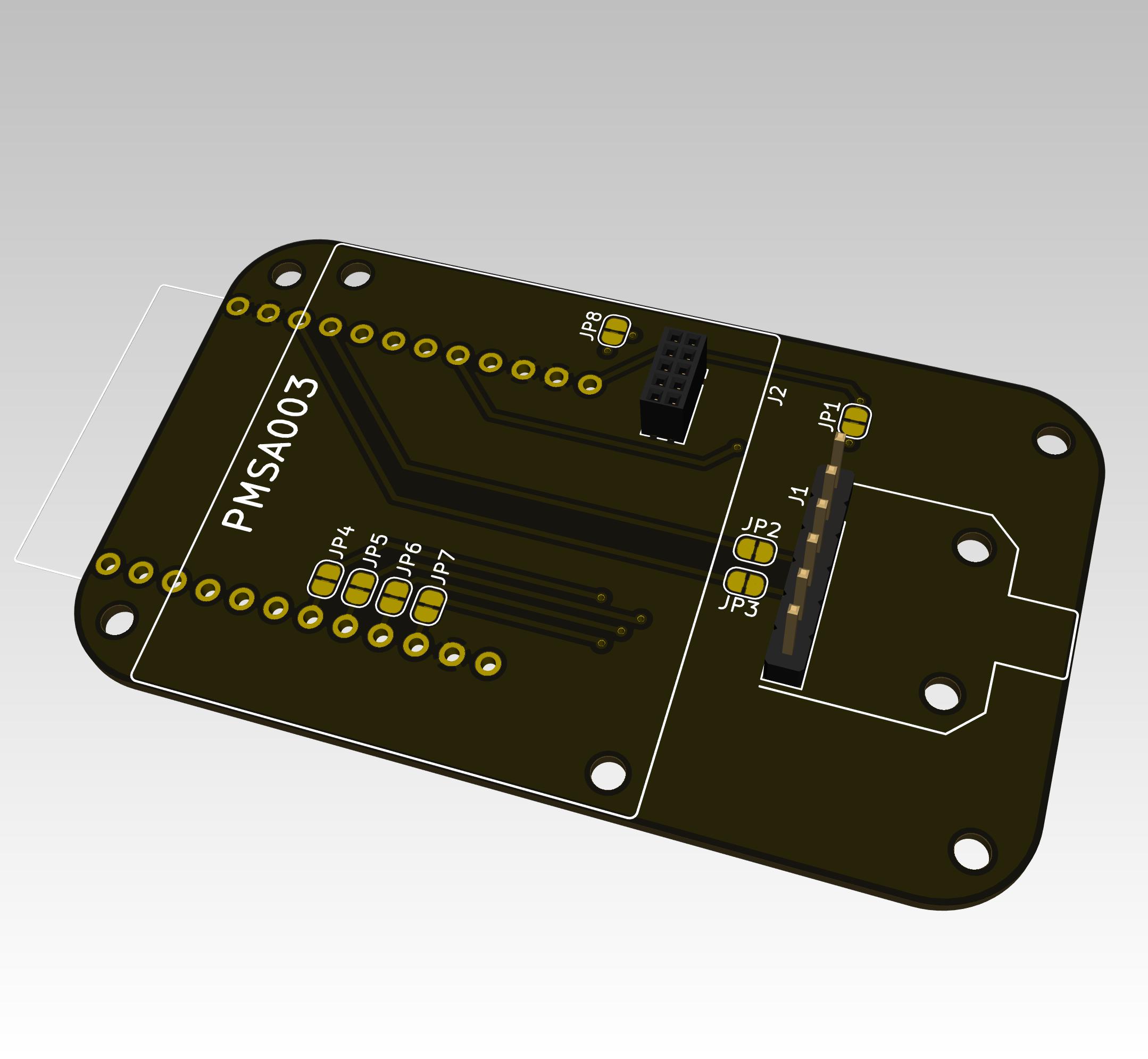 The PCB is extremely simple but has some components on it for flexibility if I needed it. There are solder jumpers to allow me to easily cut a trace and re-work something if needed, some decoupling capacitors to smooth out the power supply (again only if needed) and finally some high side P channel MOSFET that would allow me to turn off the various sensors if I wanted to make this battery powered and needed more power management.

As of writing, I haven’t used any of the extra features. The PCB is a glorified wire replacement back plane just connecting pins and hold parts in place. Only work necessary to assemble the PCB is to solder 2.54mm and 1.27mm pin headers using the headers included with the respected modules, no extra pieces needed.

The design is available on Github with the project affectionately named “Sniffer”.

I’ve used PCBWay in the past to manufacture hundreds and hundreds of boards in the past. They have an amazingly smooth online submission process and lots of options to balance PCB technology and cost.

For this project I paid $5 for the 10x boards and $18 for DHL shipping. I designed and ordered the board on Friday and the PCBs were in my hand the next Friday. Faster then expected delivery of a custom design from across the world during a pandemic.

The gerbers used for the design are on Github and can also be uploaded to the PCB manufacturer of your choice. I tried OSH Park and the renderings looked correct. I didn’t select OSH Park as I’d get fewer boards for more money with a slower delivery time. The OSH Park boards had some better properties like ENIG vs HASL plating.

That said, if anyone wants to get PCBs made, checkout the PCBWay shared project page that will let you click “Add to cart” and order ‘em with no fuss.

If you do order from PCB Way, check if they offer the TTGO ESP32 T-Display module from the gift shop as they did when I ordered my boards for $8/module.

If you want to order from PCBWay please use my referral code to save $5 which I think might make the first PCB order for you free (before shipping). Someone please let me know in the comments if this is true! 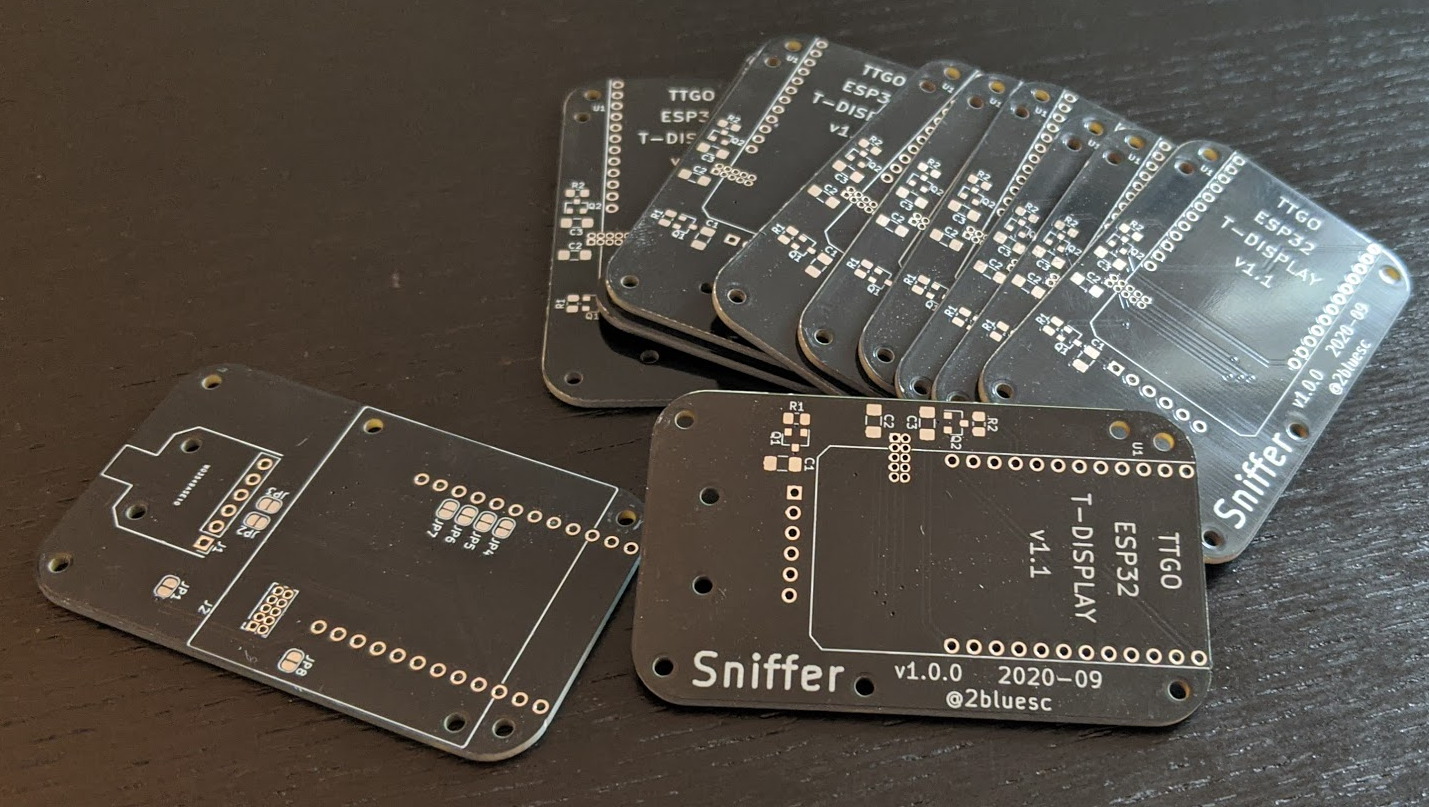 The PCB is easily assembled by doing nothing more than soldering the 1.27mm and 2.54 pin headers and connectors included with each of the components. No additional parts needed to assemble the Sniffer electrically.

To finalize the mechanical assembly some fasteners or low profile double side tape (poster tape worked well) for me to reduce the strain of the PMSA003 on the 2x5 1.27mm header.

I tried some fine pitch M2x5.5mm screws I had on hand to secure the PMSA003, but one hole is too shallow (screw is too long) and the other isn’t quite right. Clearly fine pitch isn’t the right move for threading into soft plastic.

I ordered some M2x4mm and M2x6mm coarse pitch screws hoping they work better. 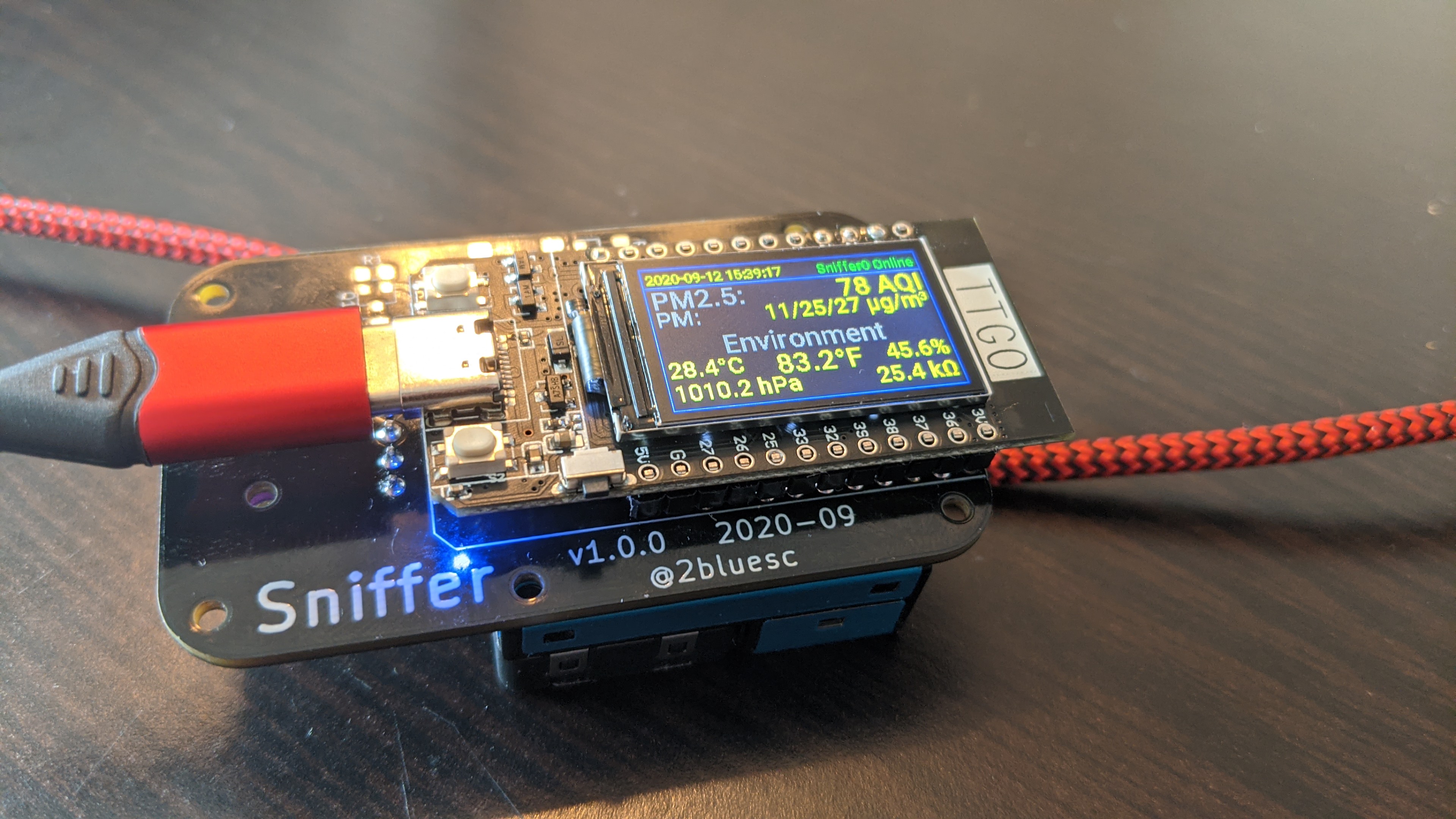 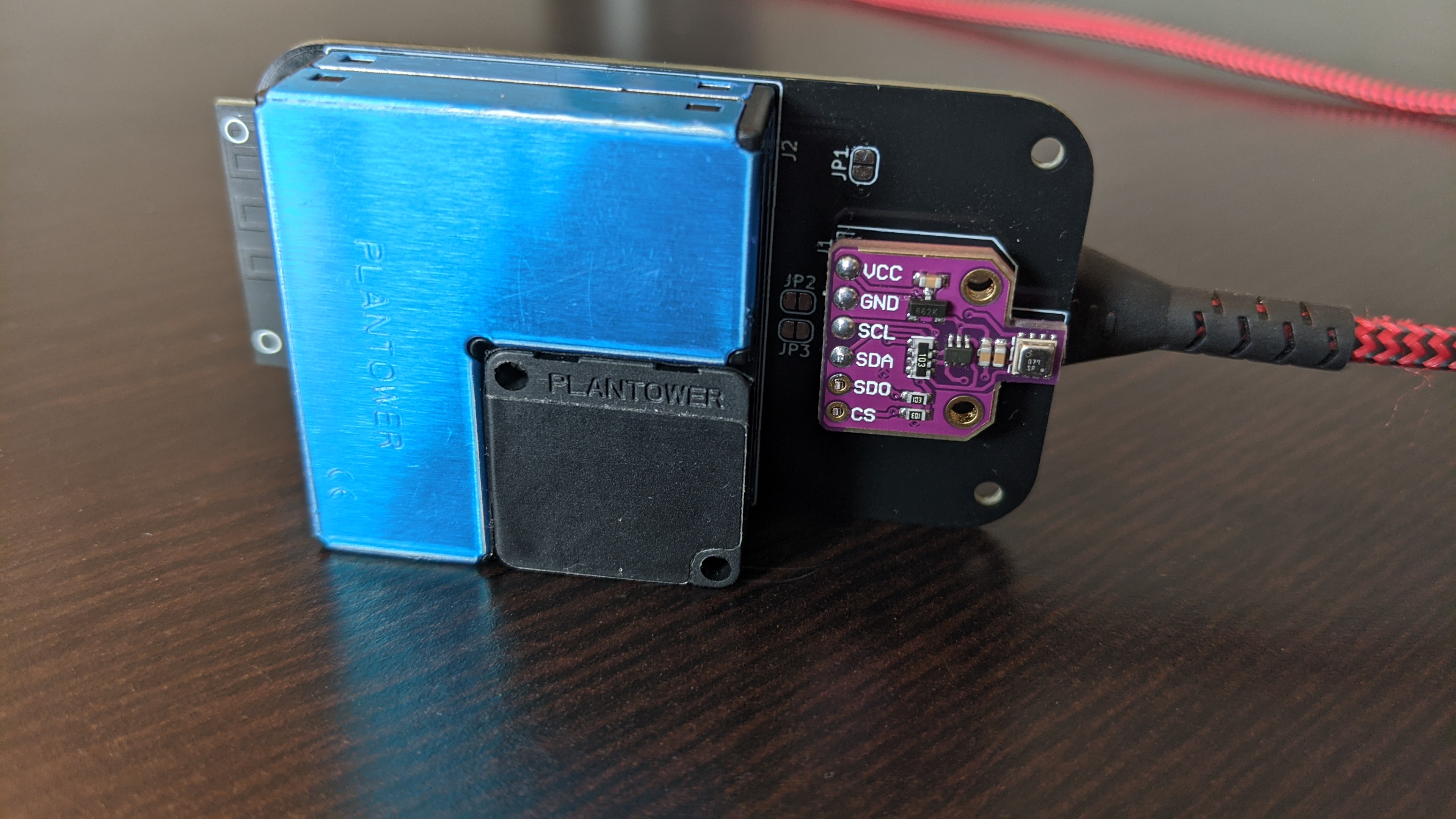 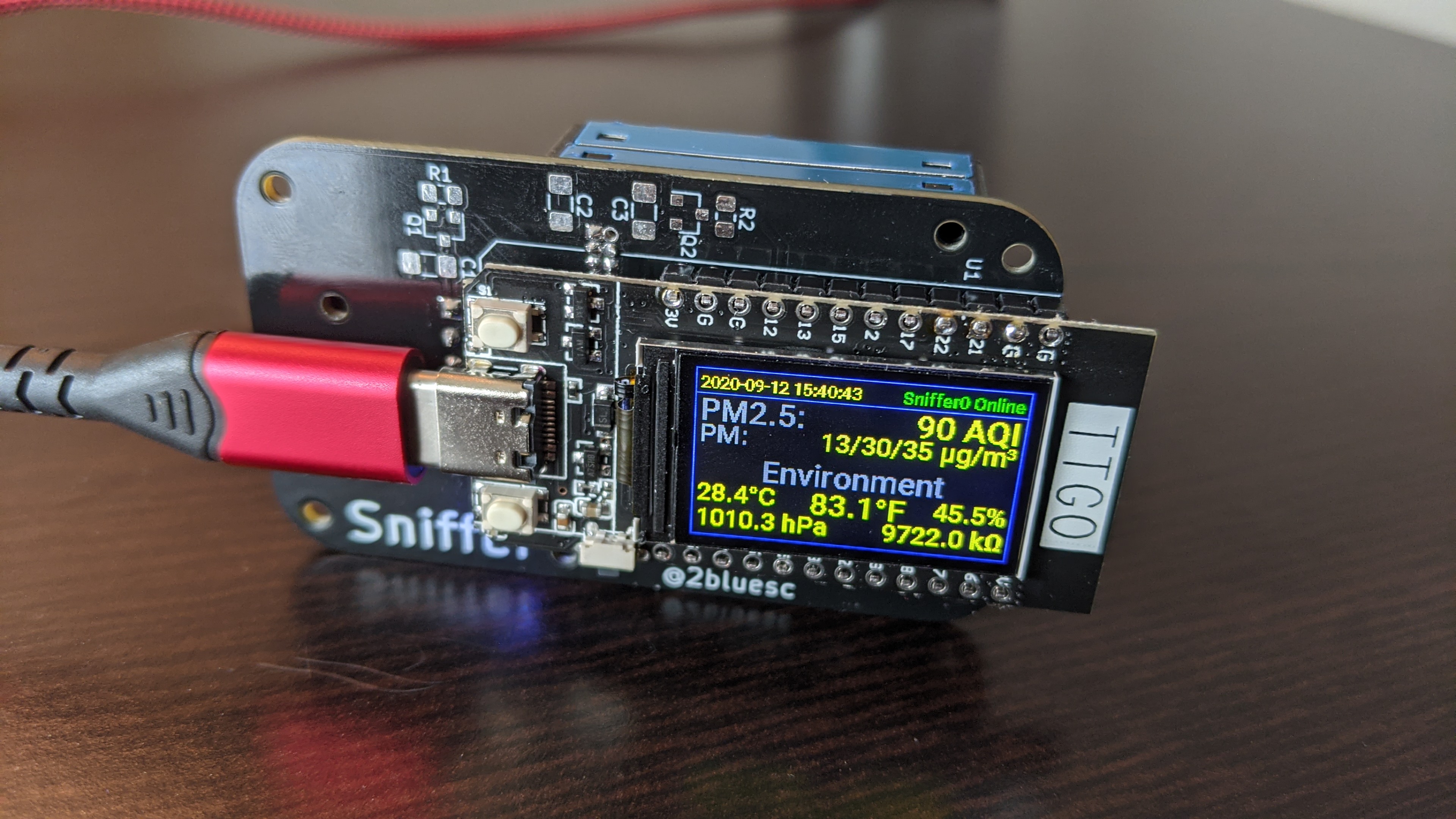 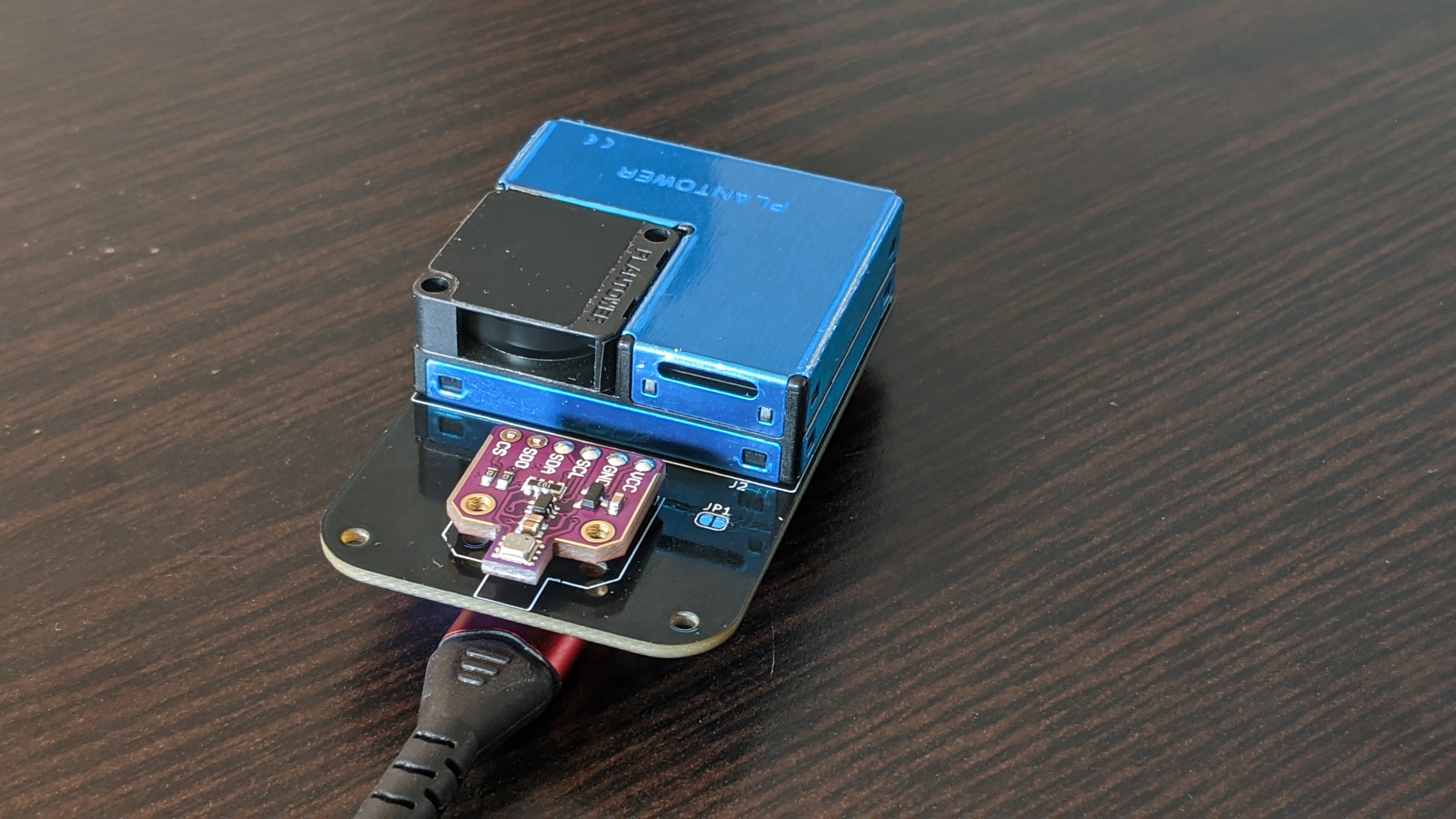 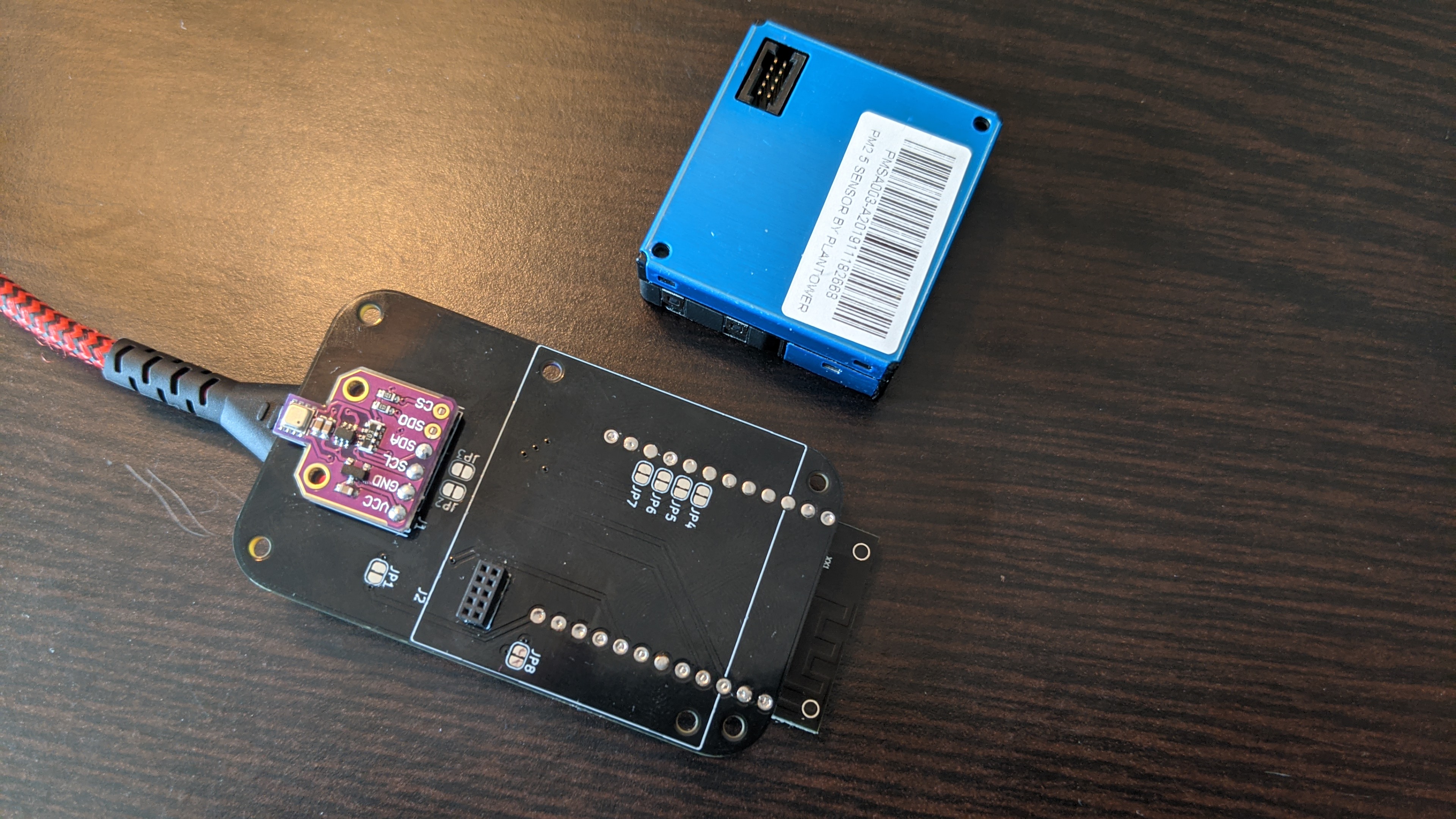 To validate the accuracy of the sensor I placed it outside and logged the data for several hours and compared it to nearby PurpleAir sensors.

Here’s the plot of the data in Grafana, the Sniffer is sniffer0_pm_2_5_aqi. 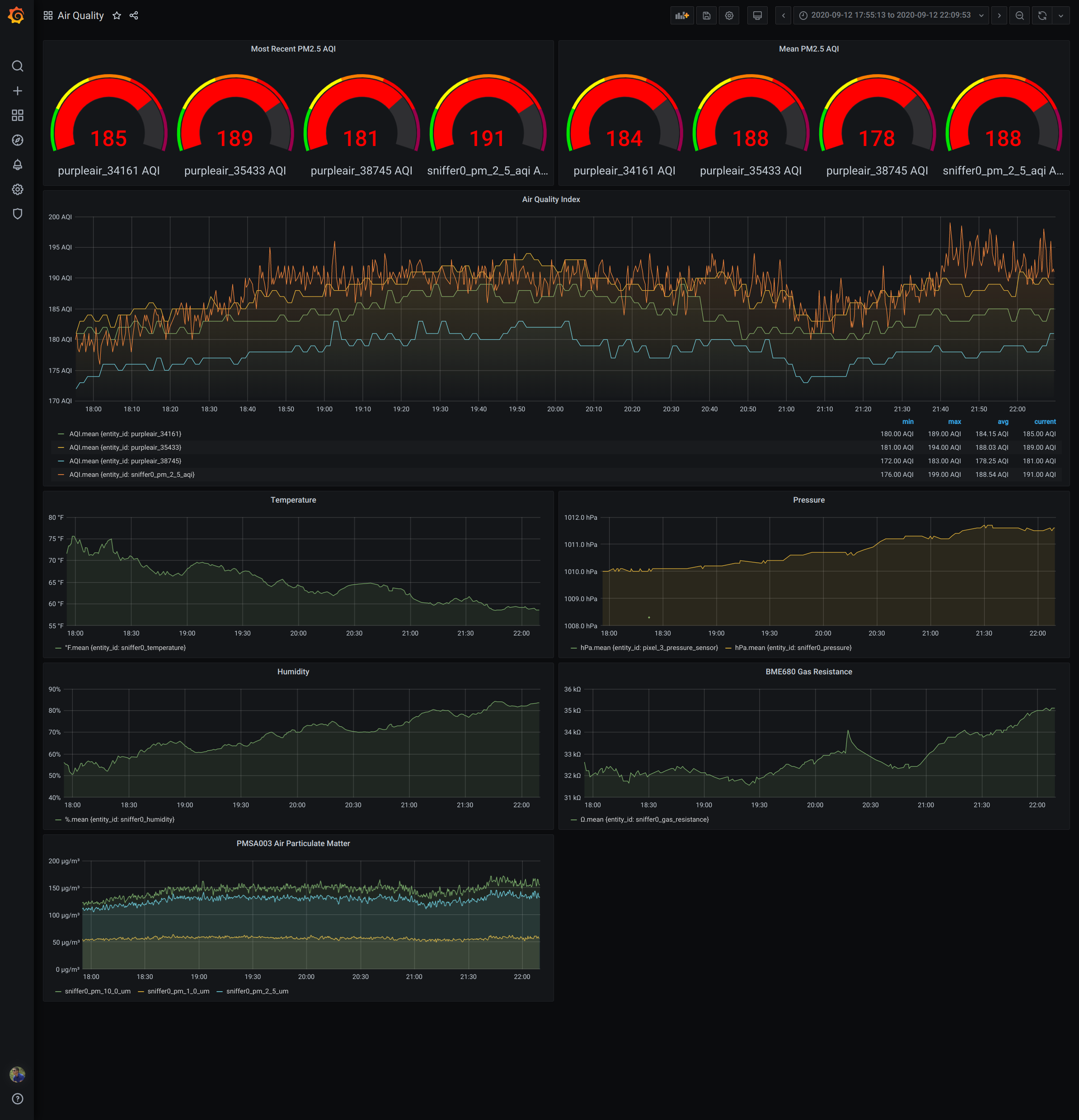 The sensor data seems to be within about 1% of the other sensors in the area.

Grafana dashboard with the BME680 parameters: 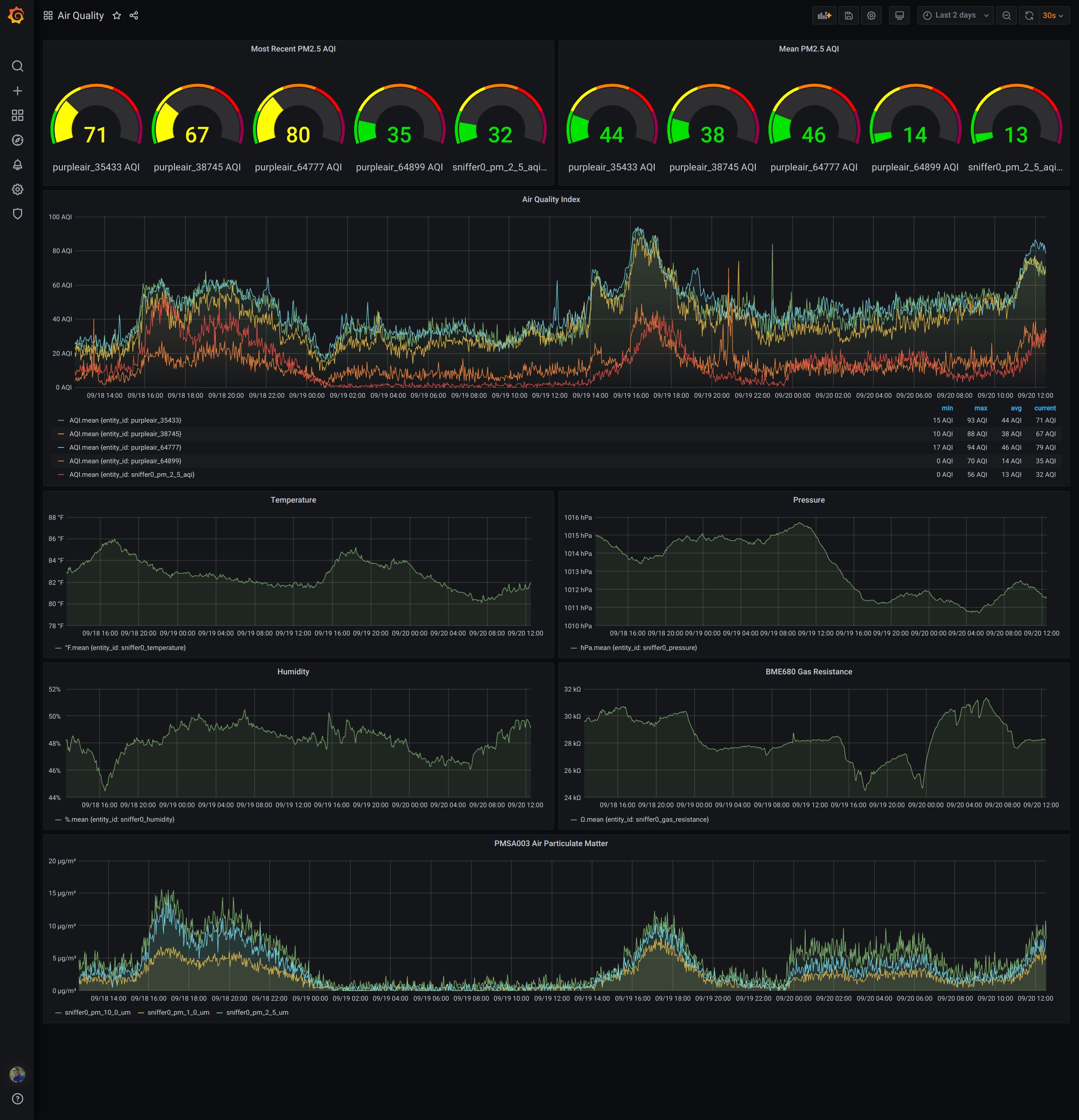 Next steps are to build more and give them to some friends. To remove the dependency on WiFi and HomeAssistant I’ll explore updating ESPHome to drop the HomeAssistant connection for a time source and use NTP instead. This is just a matter of modifying YAML files on the project repo.

I’ll probably drop the BME680 in favor of the BME280. There’s a BME280 module that is pin compatible with the Sniffer design. Would love it if someone could demonstrate a more useful use-case for the VOC gas resistance sensor. Seems this would be most useful in an industrial setting where strong solvents are present, but my home isn’t subject to those chemicals.

On the next boards I’m going to use 2.54mm pitch machined round pin headers and sockets to hold the components in place so I can swap them for future testing. The first build uses the included square stamped pin headers and were soldered in place.

A friend mentioned they’d look at making a 3D printable enclousre to hold it, so that’d be cool.

Others have asked for an assembly tutorial, maybe I’ll put together a follow-up post if there’s more interest.

Unrelated to the hardware, I want to ingest the CARB government PM2.5 data stream and log that to InfluxDB and Grafana to have a more authoritative data source.

The PMSA003 works as advertised and is close enough to the nearby sensors to give me enough confidence in its readings to evaluate the air within my home. My Winix P150 air purifier makes a notable difference on the two highest speeds and doesn’t do much at lower speeds.

ESP32 is a pretty awesome chip (price + features) and is enabled by an equally amazing ESPHome ecosystem.