I bought an Easton R4SL Performance Bike Limited Edition wheel set a while back when my cheap Mavics died about 3 years ago. I figured I’d take the opportunity to upgrade cheap wheels to a better set of wheels. This went on without incident until in October a spoke suddenly broke on my rear wheel. After hunting around for spokes and ordering a replacement set on eBay (still have some spares if anyone needs just one) and having it installed, I thought I was done. But it’s never that simple.

Upon returning the wheel with the spoke replaced and re-trued, the bike mechanic had made the comment that the bearings were starting to wear out. I examined it first hand and they were definitely gritty and loose. I went home thinking I’d tighten the bearing pre-load and order some replacements at my leisure.

Looking back on it, this is where it all started: one simple 284mm Sapim double butted straight pull spoke. That single spoke set off the money pit now know as the rear wheel headache of 2016.

I took the opportunity to tune up a number of related things: new Jagwire cables, new Sidi heels, new Shimano R55C3 brake pads, proper cleaning and some other little bits. The bike needed some year end maintenance. All the other things went without any issue. Even checked the Easton R4SL hub, tight and smooth, no play. No maintenance to date even.

The rear hub was something else. First I disassembled the hub to survey the damage and get the exact sizes of the bearings. Upon disassembly, which was pretty straight forward, I decided I might as well replace the freehub body. The freehub bearings were kind of gritty, the aluminum carrier body is destroyed, as appears common on wide range (11-30t, because mountains) Shimano road cassettes because of the missing aluminum gear carrier and most importantly the spring that hold the pawls was either broke or broken when I pulled it apart. The new freehub body would fit an 11 speed cassette, so the wheel may live on with my next bike as a beater if needed. I ordered bearings and the new replacement Easton 9-11 speed freehub body along with the needed 6901 and 6902 bearings from ExcelCycle via Amazon.

The clearest indicator of the quality of this freehub is apparent in the following picture: 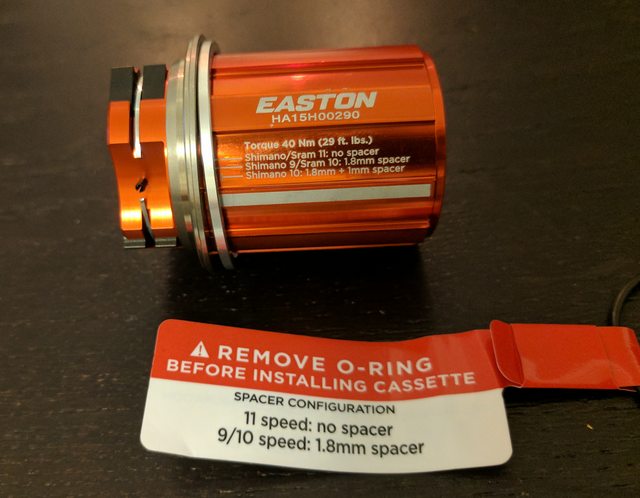 This simple picture contradicts itself. The bike came with only one spacer, why does freehub body instruct two spacers to be placed for a 10 speed? The details laser etched on the anodized surface contradict the o-ring which appears to amend the original product. My suspicion is that this part was rushed during amateur hour at Easton. Ok, but so what, things go wrong in manufacturing and it’s just a mess up on the label.

I pressed the old axle bearings out and pressed in the new ones. Inserted the axle, torqued it to spec with the tensioner lose as described by following image and my Snap-On Tech 2FR100 torque wrench. 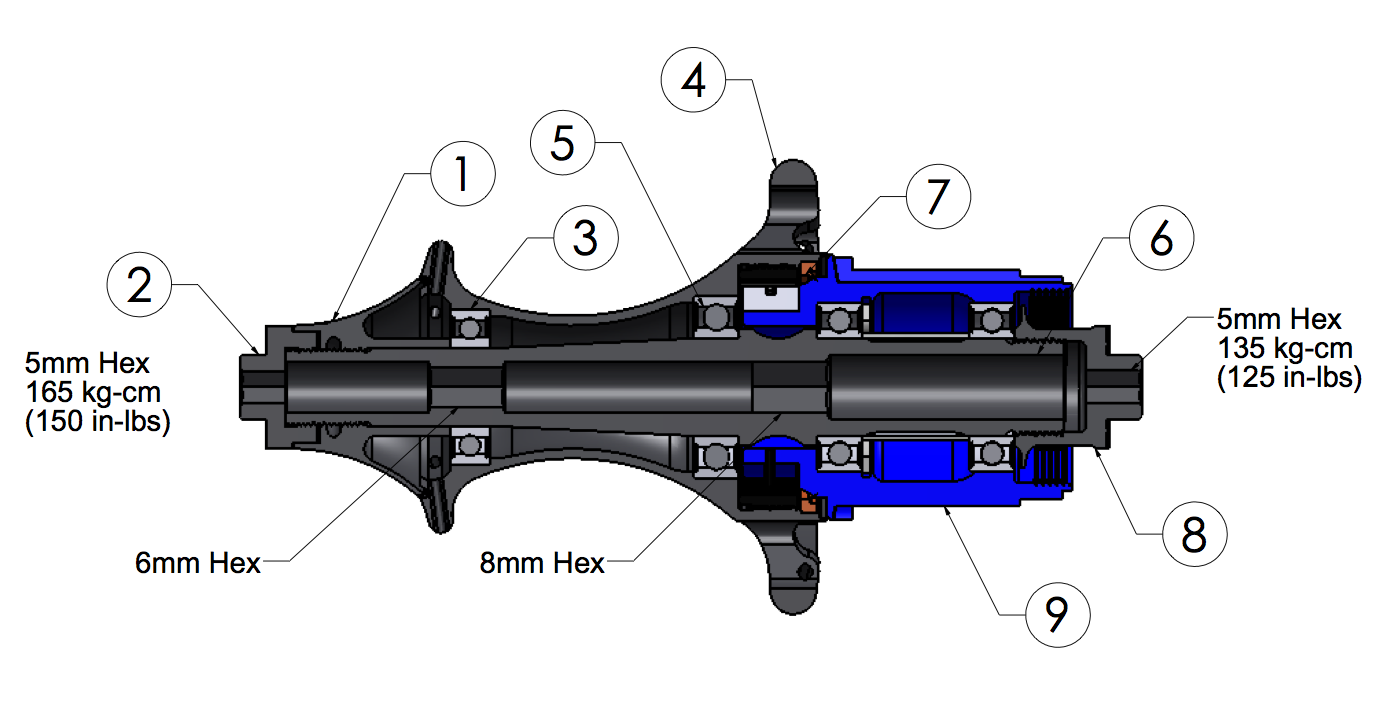 I poked around the Internet to try and figure out what to lube the new pawls with. The original freehub had a grease, but that seemed too heavy and sticky despite appearing to have worked fine. At first I put in some motorcycle motor oil I had around thinking it would be lighter, but ultimately it all came out and was later replaced by Park Tool Poly Lube which also quieted the freehub down a bit.

I cleaned the threads of the freehub, washed my cassette, and torqued the cassette down with my Snap-On Tech ATECH3FR250. Finally, I put the wheel back on the bike and torqued the “tamper proof” skewers since the wrench was already out.

The last step should have been as simple as spinning the wheel and setting the preload and checking the play. I proceeded to do this, but the rear wheel wouldn’t spin freely, instead it would periodically grab the freehub and whip the pedals around. I tore it down, checked everything, lubed it again, and then torqued it back up. Figured maybe it needed to have the preload a little loose until everything seated and then tighten it up.

I took the bike off for a few short rides, I’d guess 20-40 miles and it never got better.

A Hack To Get Me Along

I wound up discovering that the freehub body that mates against the cassette and doubles as the seal interface wasn’t true and was colliding with the hub of the bike. To fix this situation while I dealt with ExcelCycles replacement, I ordered some shims from McMaster Carr (99432A364) that pushed the freehub body far enough away from the hub to get me to and from work for the next week.

I posted a few YouTube videos that highlight the poor alignment of the cassette. Look where the freehub cassette interfaces and seals with the rest of the hub, it does not spin true:

ExcelCycles pulled through and sent me a replacement freehub body and a return shipping label after going back and forth over Amazon. They made the exchange about as painless as possible, so credit to them.

The new replacement mounted up and worked perfect with no spacers. Only thing I’ve had to do to date was replace the motor oil with some Park Tool poly lube on the pawls. I’m concerned the seal may be shot by this point. If that’s the case and the poly lube leaves, this wheel is going into the trash.

There are more pictures on Imgur for anyone interested enough to take a peek.